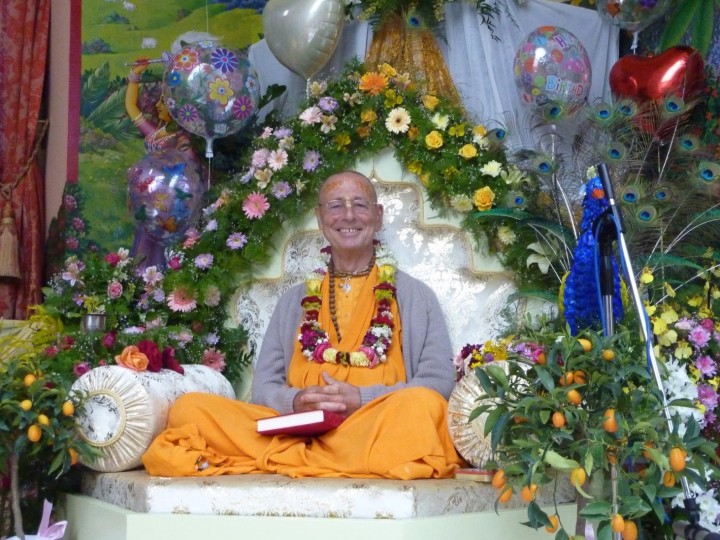 Sivarama Swami, a guru in the International Society for Krishna Consciousness (ISKCON, popularly known as the Hare Krishna movement) made a video entitled, Can Vegans Consume Milk?, promoting so-called “ahimsa milk” as being suitable for vegans to consume. The video went viral. I’ve already written about this in two previous parts (see here and here). He responded to the flood of criticism he received on this video in an audio recording.

In that recording, although he claimed that, “there are many reasonable and rational answers to all of these” criticisms, he proceeded to offer absurdities such as, “if you let calves drink all the milk that the mothers have, they’re going to get sick. They may even die…so what’s the rest for?” So, apparently, in order to save calves from the supposedly potentially fatal consequences of being nurtured by their own mothers, we’re obliged to steal their milk. What self-serving inanity!

Sivarama then informs us that “bulls need to work.” Did the bulls tell him that? Or did they have no choice in the matter? He claims that if the bulls are not made to work, they get sick. “They’re created like that.” The concern here for the health of enslaved animals is touching, but how about not breeding them into existence to be milk and work slaves in the first place? The level of blatant opportunism here is disturbing. The only reason that bulls “need” to work is because, being useless for producing milk, and not being killed (as is claimed) on Hare Krishna farms, some use has to be found for them to offset the cost of their upkeep. That is, they’re expected to pay their way as economic commodities. Bulls would not “need” to work if they were not bred as surplus to unnecessary milk production. The swami’s attempt to try to convince us that bulls are being exploited as work slaves for the sake of their own health is just an exercise in selling snake oil.

Next followed Sivarama’s equating animals with things such as potatoes, tomatoes and, bizarrely enough, streets, earth and rivers. We don’t ask their consent to use them, so why should we ask animals? But animals are not things—that’s the whole point. They’re nonhuman sentient persons who have an interest in not suffering and should not be used as if they are mere things or resources. Potatoes and tomatoes are alive but they are not sentient. Streets, dirt and water are neither alive nor sentient. Non-sentient things don’t care about what happens to them. Sentient beings do. Sentience is what’s morally relevant. Is it really necessary to explain these basics to a man of mature years who purports to be a spiritual teacher, and now, an animal advocate? Sivarama’s comic book standard of logic is embarrassing.

Furthermore, it’s not a matter of asking the “consent” of animals who are incapable of giving it. The whole concept of consent—even if animals were able to understand the concept and clearly communicate consent—is meaningless in the context of domestication that is about being bred into slavery as property. It’s a matter of not bringing them into existence in the first place with the sole aim of exploiting them. Using sentient persons as property is inherently unjust. The interests of the property-owner will always trump those of her or his property—that’s what it means to be property. The notion of “consent” on the part of someone who has been designated property makes no sense. Once a being has been bred as property it’s already too late to talk about “consent.”

So both those, like Sivarama, who claim that consent is unnecessary, and those, like other Hare Krishna devotees (and Sivarama himself, in a later video response) who claim that the cows do show signs of giving consent, are missing the point entirely. Consent—even when there’s an ability to understand and communicate the concept, which is doubtful for animals—is a function of power. You have to have some power, and some autonomy, in order to be able to make the choice to give or withhold consent. Animals who are property possess no power and no autonomy. Their entire existence, and every aspect of it, is dependent on the whim of the property owner.

So far, there’s nothing “reasonable” or “rational” in this response; just preposterous rationalisations and the same, tired, old, vacuous “What about plants?” level of excuses that vegans have heard, and debunked, a million times before.

But then Sivarama comes out with something that, while neither reasonable nor rational, is at least original: that “not engaging someone according to their dharma is…violence.” So if it’s the dharma [vocation] of cows to “give” milk and the dharma of bulls to work, as he claims, then to not exploit cows for milk or force bulls to work is “violence.” It follows that, since cows are being bred and raised exclusively to provide milk, not consuming that milk would be violence. The only reasonable way to interpret this statement is that consuming “ahimsa milk” is a religious obligation for ISKCON devotees, since surely ISKCON authorities would not condone violence by them.

My response on hearing this astounding assertion was to be very doubtful that consuming “ahimsa milk” is obligatory for members of ISKCON. This would mean that vegans are completely excluded from the ISKCON community, due to violating religious obligations—that is, having no intention of ever abiding by them. But we know from anecdotal reports that there are many vegans in ISKCON, including some who are actual ethical vegans, not so-called “veggie-vegans,” that is, those who consume no animal products at all.

Also, it’s an odd religion that would exclude the 65% of people who experience some form of lactose intolerance as they age past infancy. Approximately 70% of African Americans, 90% of Asian Americans, 53% of Mexican Americans, and 74% of Native Americans are lactose intolerant. Studies have shown that a substantial reduction in lactase activity is also common among those whose ancestry is African, Asian, Native American, Arab, Jewish, Hispanic, Italian, or Greek. I doubt people from all of these groups are excluded from participation as devotees of Krishna due to not being able to consume milk for health reasons. It’s difficult to see how ISKCON could have grown at the rapid rate it did after its inception in 1966 if people unwilling or unable to consume dairy products were ineligible to join. I don’t recall ever hearing anything about Hare Krishna devotees quizzing people at airports concerning whether they consume milk before they tried to sell them a book or a packet of incense. Ironically, considering how enthusiastically Bhaktivedanta Swami, the Indian founder of ISKCON, touted milk as a “miracle food,” researchers have found that three out of four Indians have no tolerance for milk. Milk is also perhaps the most common self-reported food allergen in the world. And then there’s the large number of people who avoid milk because they know it’s detrimental to their health.

Yet according to Sivarama’s comments in this audio response, all of these people morally and physiologically averse to dairy products, who therefore avoid them, would be culpable of violence due to failing to “engage” cows in their supposed “dharma” of producing milk for humans to appropriate. How bizarre.

In addition to this, even if ISKCON, or some members of ISKCON, thinks there is some scriptural or other basis for a religious duty to consume milk, we know that all religious people choose which scriptural standards of behaviour they abide by, according to which values they consider important, and which they consider obsolete. No one, not even the most devout, follows all of the moral injunctions in the Bible or the Torah, and this this is no less true of those who claim the Vedic dharma-shastras and other scriptures as their source of conduct, as ISKCON does, including their venerable founder.

I contacted Sivarama and asked about this Orwellian notion that not to exploit these animals is itself violence. I received a reply from his assistant that contradicted the implication of a religious or moral obligation to consume milk and other dairy products. I’ll discuss this in a subsequent essay. But if it’s the case that there is no obligation as far as ISKCON is concerned to support dairy production on Hare Krishna farms, why is Sivarama saying that it’s “violence” to not support bovine agriculture? It’s all very incoherent and one is left feeling that Sivarama is making it up as he goes along in the absence of any substantive argument in support of exploiting animals for milk.

Of course, Sivarama Swami is up against the reality that it’s impossible to morally justify consuming and promoting the falsely named “ahimsa milk,” or any other animal product. There simply are no good arguments to make against veganism. I hope he will soon stop trying and drop this futile pursuit. I hope he will decide to do the right thing by animals by going vegan. He should definitely stop fostering the very harmful idea that there is a right way to do the wrong thing. There isn’t. The only right thing to do in relation to animals is to go vegan.

To learn about how to go vegan, please see here.

This essay, and others in this series, draws on the ethical theory of Professor Gary Francione, founder of the Abolitionist Approach to Animal Rights.

How Do I Go Vegan?